I will never forget my first time at a French dining table. I was served some bread with butter to spread on top of it. Hungry and excited, I was immediately confronted with this sight: 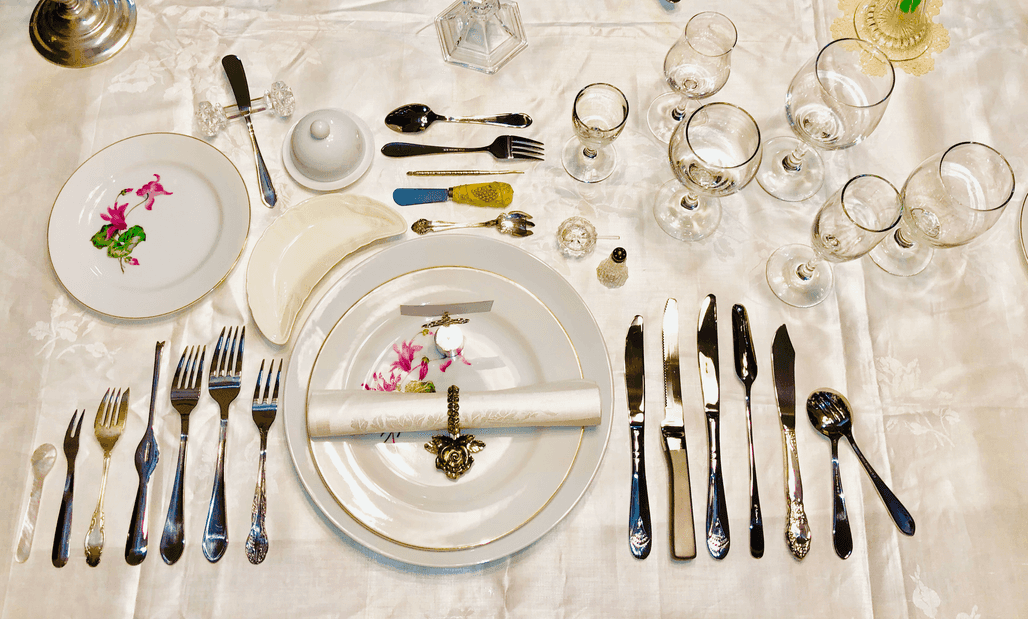 Yikes. If no one were looking, I would have been pleased using my hands. Confronted by an entire world of forks and knives, I felt compelled to use at least one of them. Except I do not know which one.

I now have four choices: a) ask someone at the table and risk exposing my lack of culture b) take a gamble on one and wish I get it right c) wait for someone else to get to their bread and mimic them d) excuse myself to the bathroom stall, quickly Google the words “French plate setting” and frantically work towards memorising every last detail of the diagram I find

As the observer effect in physics teaches us, the act of observing something will inevitably change its underlying nature. Now, sitting in this dining room, I feel observed. My fear of embarrassment is getting between me and that beautiful loaf of Focaccia.

Like live performers in Broadway blanking on their lines, picking the wrong fork or eating that bread with my hands will create a break in our known social script. Steve Pickering describes this feeling when he forgot his lines while playing old Siward for Macbeth, “We all just stood there, with time going by so slowly it seemed like a freight train could have gone across the stage and everybody in the audience could have gone out for cocktail weenies.”

One wrong move will send blood flushing up my face, filling me up with a sense of vulnerability almost equivalent of someone walking on me naked. The emotion generated from this temporal “break” is what Sarah Perry describes as Cringe.

Cringe can be described simply as, in Perry’s words, “a misfit between form and context.” It represents a moment marked by the violation of a social script that generates the inconvenient emotions that we cite technology as an ailment for: awkward, inconvenient, difficult.

In today’s Virtual-Brokered Reality driven by the COVID19 crisis, technology has become the primary brokerage of our human relationships. Like shields on a battlefield, our screens provide us a means to carefully write, edit, and delete our selves to avoid awkward and inconvenient moments; like a performer.

Calling technology a “brokerage” of human relationships is also another way of saying that we have commodified our interest in each other. Followers and like counts, former employment, and educational institutions become the measure of our being. Just existing is now insufficient for someone to be interested in you.

This is not a criticism of technology, but a call for deeper reflection. As we work towards coming to terms with our “new normal,” we have to constantly be mindful of the pernicious effects that come with conflating the quality of our virtually-mediated reality with reality itself. The isolation for many will wear them down, as a majority of their social interactions will begin to turn into performances, not the mere experience of living.

Walking back to the dining table from the bathroom after memorising the diagram of “French plate setting”, I was confronted with the sight I did not expect. The focaccia loaf is gone. Our servers have gone ahead and reshuffled the plates and cutlery for the next course, and my stomach makes a little bit of a growl.

Authenticity is the ability to break free from the cycle of signaling encompassing all our activity, creating a sphere where we are open to optimize our happiness, not just what people think about us. Now that the world has transitioned to a social script dominated by digital recreations of our flesh-like selves, let us continue to remind each other, for the sake of those we love and hold dear to us: authenticity can sometimes be inconvenient, awkward, and uncomfortable, but sending an 🤗emoji will never be the same as giving a hug itself.